Life is a Garden > Months of the Year > January > January in the Garden – Back to Basics in the New Year. > LIAG_JANMushrooms-Poisonous2 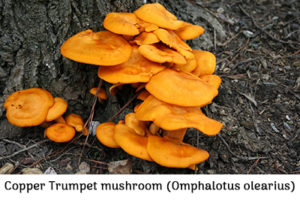 Although there are so many delicious mushrooms in the wild that you can pick and eat, there are a lot of poisonous ones to stay away from.
By far the biggest culprit is the Amanita phalloides – or the Death Cap mushroom – which occurs throughout South Africa. Ingesting it can be dangerous – it accounts for 90% of all fatal mushroom poisonings. The toxins from this mushroom attack your liver and kidneys. Look out for a pale yellow to a light-olive cap, which grows from 5 to 15cm in diameter. The gills are white and the spore print is also white. It’s definitely not to be snacked on!
The Copper Trumpet, also commonly known as the Jack-o’-lantern mushroom is orange to yellow in colour and, yes, it is poisonous. Although enchanting with its large, funnel shape and gills that are bioluminescent, which glow in the dark, this mushroom is filled with a compound called luciferin. Rather observe its beauty than try and have this fungi for lunch.
The False Parasol mushroom is the final fungi we will be discussing. It has a convex cap at full maturity, that grows from 5 to 40cm in diameter. The gills are white when young and turn green with age. The mushroom then turns a dingy red when bruised. The stem grows from 5 to 25cm tall and 1 to 4cm in diameter. It is highly poisonous, producing severe gastrointestinal symptoms of vomiting and diarrhoea.