Life is a Garden > Months of the Year > November > Vegetarian

Whet your appetite with vegetarian nibbles!

Share the varied bounty of your November food garden with friends or family in Greek style with a local twist! Think about freshly grown ingredients for meze, accompanied by ice-cold white wine and happy hours spent eating delightedly in the cool shade of a tree. 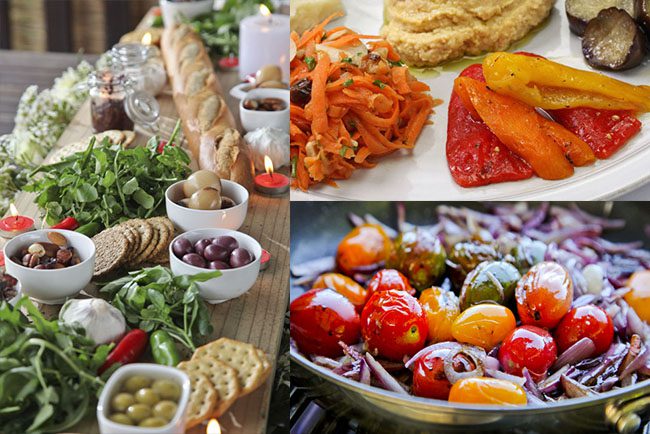 Meze is simply a selection of small dishes served with drinks as appetisers before the main meal. But if you supply enough variety, texture, colour and flavour on your vegetarian meze plate using squashes, cucumbers, aubergines (eggplant), tomatoes, beans and sweet peppers, a main dish is not even necessary. Catering could not be easier!

Aubergine fries: Combine 1 cup of self-raising flour with enough beer to make a pouring batter. Chop into this a handful of fresh coriander and one chilli. Add a pinch of salt too. Cut two aubergines (leave their pretty skins on) into 1cm-thick slices. Dip into the batter and fry in vegetable oil until golden brown.

Pan-seared zucchini and summer squash: Cut the squashes into thick slices and sprinkle them with whole, fresh rosemary leaves. Heat some extra-virgin olive oil in a hot cast-iron skillet and sear them on both sides until nicely browned and crisp.

Roasted bell peppers: Halve two green, two yellow and two red bell peppers and pack them on a baking sheet lined with aluminium foil. Roast in a very hot oven (about 230°C) until the skin starts blackening, turning them over every now and again. Let them cool before removing the stalks and pips. Gently pull off the blackened skin (it comes off easily).

Next, add two cloves of minced garlic, a generous dribbling of extra-virgin olive oil and a pinch of salt. Allow to rest for a few hours and then serve at room temperature. 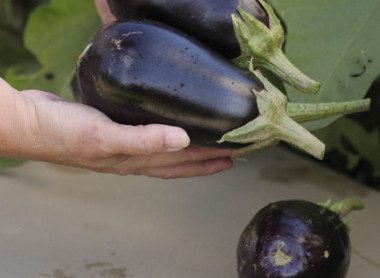 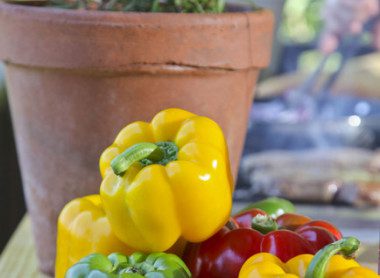 Cucumber meze: Peal and thickly slice a large cucumber in a bowl. Add the juice of ½ a lemon, a teaspoon of chopped mint, salt and black pepper to taste and dress with 1 tablespoon of olive oil.

Green bean delight: Boil about 500g of baby potatoes until soft. Top and tail 200g of freshly picked green beans and tip them into boiling water for a minute or two. Drain under cool running water and leave to dry. Meanwhile, finely slice two shallots or ½ a red onion and place in a bowl. Sprinkle with 3 tablespoons of wine vinegar and 1 tablespoon of olive oil and leave to stand for about 5 minutes. Toss in the cooled whole potatoes and green beans. Sprinkle a handful of chopped, fresh garden mint over the salad. 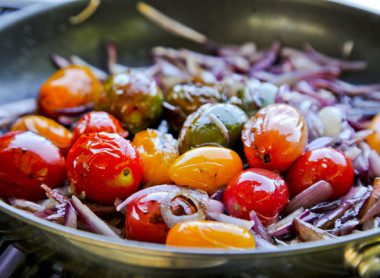 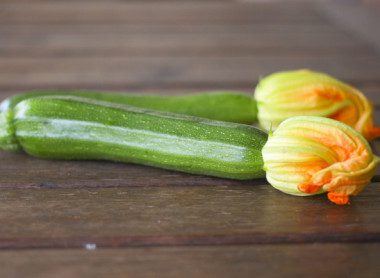 To compile your Meze feast, dish up the prepared vegetables in small bowls and plates. Add bowls of extra olives, herbed feta cheese, grilled halloumi, ready-made hummus (made from blended chickpeas and spices), tzatziki (a dip made from Greek yoghurt, cucumber, garlic, dill and mint) and lots of warmed pita bread cut up into triangles (the latter items can be bought from any good supermarket or deli).

Eat slowly to make it last, eat light and, above all, eat lovingly… A feast compiled from the goodness of the garden deserves time and respect!

Never allow any of the above-mentioned vegetables to sit for too long on the plants in the garden. Harvest them as soon as they are ripe, or they will become stringy or tasteless. If you have a glut, dish it out to friends and family.