Life is a Garden > Months of the Year > December > Beguiling Begonia

Gardening in shady areas can prove to be tricky. Begonias fill that gap beautifully, each plant producing masses of jewel like flowers to brighten the darkest of corners.

Begonias belong to the Begoniaceae family which has over 1,200 species. The most recognisable species being B. semperflorens. Begonia, named after the French amateur botanist, Michel Bégon who discovered the plant and semperflorens, meaning ever-flowering.  Begonias are native to the moist tropical and subtropical climes of South and Central America, Southeast Asia and Africa. Being a member of the order Curcurbitales, Begonias are quite closely related to food groups such as squash, cucumber and melon. 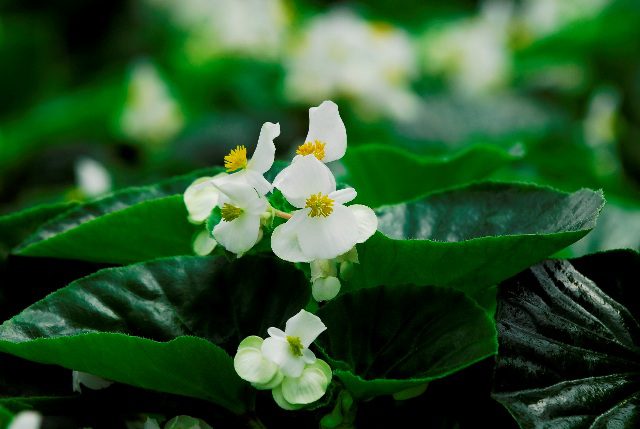 In the subtropical regions of South Africa, Begonias can be treated as a perennial, however in the frost regions it is grown and used as an annual because they do succumb to the harsh frosts of winter. 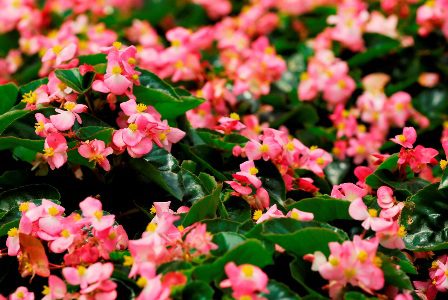 B. semperflorens are the most popular and well known of the of the Begonias. These plants are herbaceous with an unmistakable foliage. Both the stems and leaves are thick and fleshy. The leaves are large and ovate in shape with serrated edges. There are two distinct leaf colours, green and bronze/red. The shiny leaves are a lovely backdrop for the gem like flowers. The flowers are as simple as they are symmetrical. Comprised of two sets of equal petals. The upper and lower are half moon shaped and the larger of the sets. The side petals are a third in size and oval. Flower size varies depending on the variety, you can expect anything from 3cm to 8cm. The colour range is limited to white, red and various shades of rose and pink. All flowers have a bright yellow centre.

B. semperflorens hybrids can vary in size. The very dwarf type can be used as edging in your flower beds as well as in pots and hanging baskets. The larger varieties, sometimes as tall as 30-40cm, can be used to fill the middle section of the bed or even used to create a border towards the back. Planted en masse they create a wonderful, long lasting show of colour. 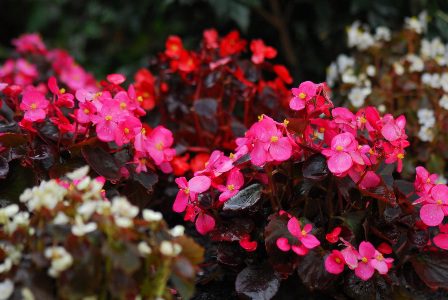 The most ideal location for Begonias is dappled shade, although they can tolerate deeper shade but are then less floriferous. The bronze leaf plants can tolerate a sunnier location than the green leaf plants. Begonias can be planted in average to moderately fertile, well draining soil. These plants prefer their soil moist, but not sodden. Once established they can tolerate mild drought and this is due to the reserves in their thick, fleshy stems and leaves. In the very hot summer months it is important to mulch around the plants; it helps to keep the roots cool and significantly reduces evaporation. Space well between each plant to allow for ventilation. This will reduce the chance of any disease taking hold of the plant.

Begonias require a little bit of maintenance. Remove dead flowers and yellowing leaves, this will encourage new blooms. Cut back any stems that have extended beyond the mound of the plant, this will keep the plant compact and neat. Feed fortnightly with a half strength dilution of a soluble multifeed.

Once you have had Begonias in your garden, you will never be without them. These charming plants will grow where not much else will and do so with gusto. What are you waiting for?
Happy gardening!

Begonias can be used as houseplants?