Life is a Garden > Months of the Year > April > Antirrhinum: April’s bedding plant 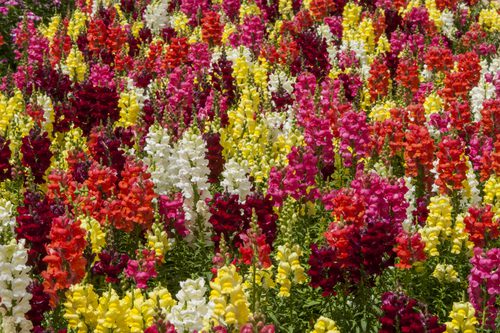 The word Antirrhinum is one that even wordsmiths don’t enjoy receiving in a spelling bee and if you mention the mouthful that it is to most they quite likely won’t be sure what you’re referring to. Instead, say “snapdragon” and even the most common layman will not only greet you with a knowing nod but also be able to spell it first time round. This complex name is derived from the Greek words “anti” and “rhin” meaning “like” and “nose” respectively which describes the snout shaped flower. The common name was “evidently” given because the flower looks like a dragon’s face and snaps when squeezed together. Is there anyone who hasn’t squeezed a snapdragon’s cheeks together? Snaps have an interesting dual symbolism of both deception and graciousness. 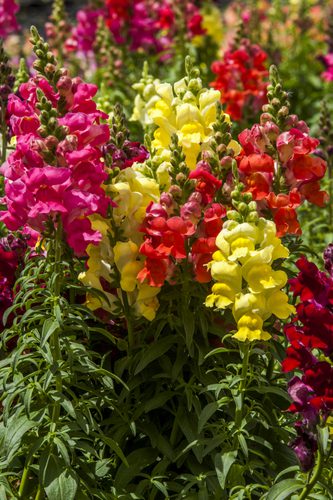 The ties to deception are believed to come from the legend that a person concealing a snapdragon would appear fascinating and alluring when in fact they are not. When presented to a host or used in a bride’s bouquet, however, this signifies the more gracious symbol afforded to snaps and represents appreciation and good wishes. In Germany, these blooms were even believed to keep children safe from evil spirits if hung over their beds among an array of other magical uses. It doesn’t matter whether you’re looking for something tall, in-between, or short for your garden, snaps have an amazing range when it comes to heights, with your shortest, dwarf varieties starting around 15cm and others peaking at an incredible 120cm. Naturally you’ll be looking to buy the dwarf types if you’ve a window box or container to plant up and they even work really well as edging or border fronts. Your middle of the range heights would be great for regular mid-range bedding, and naturally the giants of the snaps world will be relegated to the back of the bed.Don’t plant them too far back so as to make them inaccessible though because they make excellent cut flowers! They may need a little help with staking until their stems are nice and strong.