Burst into spring with vygies

Vygies are a family of jewel-like plants that are in full flower during September. 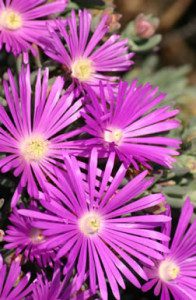 Vygies – or mesembryanthemums – are truly South Africa’s most colourful plant group. Their silky-textured flowers – in just about every colour of the rainbow – will give an extraordinary luminosity to any border. With more than 1 800 species from which to choose, whatever your taste in plants and garden design, there will be a vygie to suit your fancy.

The widely used Afrikaans name vygie – which literally means ‘small fig’ – is based on the fact that the top-like fruiting capsule also resembles a small fig. The best know spring-flowering vygies are the Drosanthemum, Delosperma and Lampranthus species. They include many small shrub-like plants as well as groundcovers, and have an enormous range of flower colours.

Lampranthus species have smooth leaves, and large, shiny flowers. Delospermaspecies have conspicuous seed compartments, whilst the leaves of Drosanthemum species differ from those above because of their dew-like shiny cells on the epidermis – hence their common name, ice plant.

Image on right and below: Lampranthus amoenus 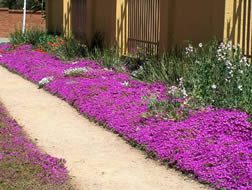 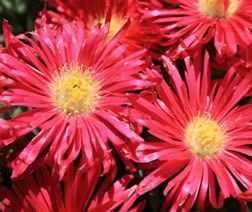 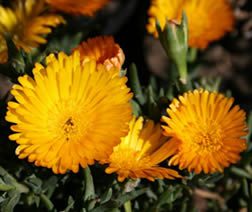