Coleus – Leave it Out

Taking a look at the common names for coleus, it doesn’t take much imagination to tell, it’s all about the leaves. “Flame Nettle” and “Painted Leaf” conjure up the most vibrant and colourful images and even though it’s also referred to as “poor man’s croton”, part of its history suggests that coleus is anything but. Though native to South East Asia, this normally tropical plant was introduced to Victorian gardens by Dutch botanist Karl Ludwig Blume, causing quite a stir with the privileged. 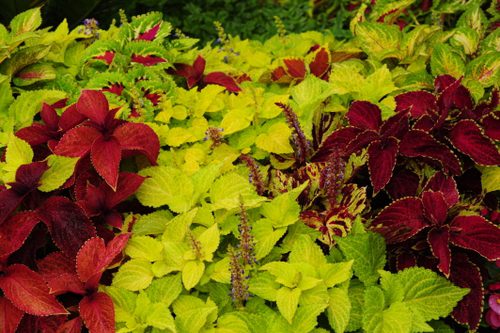 Coleus became the core fibre in what was known as, “carpet gardening” in the late seventeenth century and aristocrats were clambering over themselves to create the most elaborate weave in a bid to outdo each other. Seen from above, a balcony or upstairs window, the effect of these tapestries was stunning, creating mattresses of colour in contrast to the lawn. Growers quickly capitalised the demand for the plant and the most intricate palettes conceivable were brought to life. Prices for seeds rose sharply as the gentries appetite grew in what became known as, “The Great Coleus Race.”  There were no reports of gauntlets being thrown or pistols drawn, but the Joneses were well and truly kept up with. As with all vogues, the fervour eventually died down and the painted nettle filtered down into the common garden and window box. If you’ve got enough space, why not try some carpet gardening yourself? 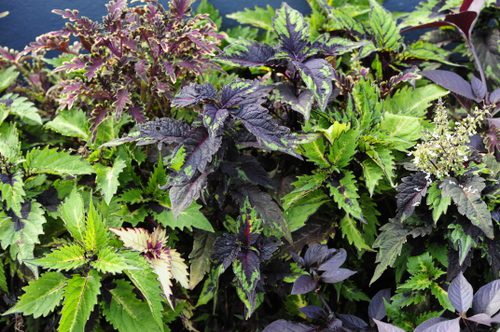 As with people, some can’t tolerate full sun and in the case of coleus, very few do with most enjoying partial shade or dappled light. However, vegetative hybrids that do tolerate light will realise their full potential enjoying a few hours of sun per day.  Excellent for use as a ground cover, these plants will inject colour into the darker, drabber corners of the garden and will also do well indoors. They require fertile, well-drained soil and new plants, in particular, will benefit from a little extra watering. When planting, space your coleus uniformly and pinch back to promote new growth (pinching back the main stem at around 15 cm will result in a much bushier plant). At maturity you can expect a 30cm spread so this should be accounted for when contemplating your designs. At 20 cm high with densely packed foliage, this mini canopy will act as a natural mulch, keeping the soil cool through the summer months.

Indulge your plants with a liquid all-purpose fertiliser feed once a month and although very low on maintenance, these babies will need to be watered regularly. Remember that evergreen coleus is a warm season annual, sensitive to frost and should be wintered inside.

So whether it’s a leafy Persian rug you’re after or simply a splash of colour for a patio pot, haul yourself down to your local Garden centre and get cracking. 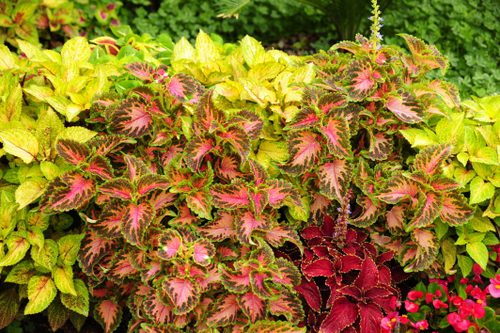