Cauliflower is regarded as the aristocrat of the vegetable world and there is something venerable about a large, snowy white head of cauliflower. 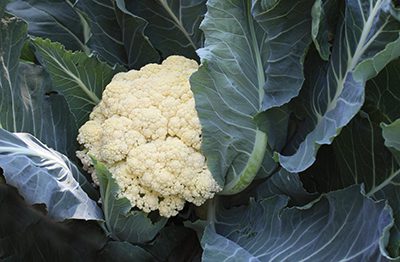 Its long sowing cycle starts in November in cooler areas, but in most temperate areas the best time to sow is February or March, while in hotter areas, like the Lowveld, sowing should be as late as possible.

There are a number of tricks for cauliflowers. Choose the coolest section of the veggie garden and plant it in positions that receive afternoon shade. Once the heads, known as curds, are about 10 cm in diameter, some of the outer leaves can be brought up and folded over the head to prevent discolouring. Keep the leaves in place with paper clips or string.

A variety like ‘Snowball’ can be planted as an early crop while ‘Wallaby’ is better later in the season. Cauliflowers can also be grown in containers, especially the baby varieties, which can be placed in the best possible growing position and conditions. The containers need to be quite big and deep, as a single cauliflower has a spread of about 45 cm. The combination of pots of chillies and pots of cauliflowers can be a spectacular novelty. They can also be used as table decorations, and if you want to be really creative, colour the heads with natural plant colourant to match your colour scheme.

Cauliflower has some important cancer-fighting properties, including substances that assist the liver in ridding the body of carcinogenic substances. It is also high in fibre and vitamin C, and low in fat. Like other members of the Brassica family, cauliflower contains several phytochemicals, including sulforaphane, which is an anti-cancer compound that is released when it is chopped or chewed. Also, the compound indole-3-carbinol appears to slow down or prevent the growth of tumours in the breast or prostate.

Being a gross feeder, cauliflower needs very fertile soil that should be enriched with lots of compost and perhaps a granular fertiliser like 2:3:2. They do best in heavy soils as these retain nutrients better than sandy loam soil. Lime can be added to slightly acid soil. If you are not in a rush to sow, you can take your time in preparing the bed and adding in compost until you feel it is rich enough.

Seed can be sown in seedling trays but it is better to sow in-situ. The seeds are quite big and must be planted deep enough, at least 1 cm deep. Cauliflower needs space to develop, so don’t plant them too close together. Sow seeds 45-60 cm apart and I prefer to plant three seeds per drill/hole. The seeds that aren’t so strong can be pricked out later and eaten as sprouts in a salad or transplanted. For a family of four it is probably only necessary to plant five plants per planting. The interval between each successive sowing depends on the amount of cauliflower you want – from two weeks to a month. Transplanting the thinned out seedlings from each sowing will act as succession planting. Mound up the soil around the seedlings as they tend to fall over.

Cutworm can be a major problem. Use cutworm bait or keep the cutworm away by pushing an empty cardboard toilet roll into the soil so that it forms a collar around the seedling. The cardboard roll eventually decomposes. Aphids can also be a problem, which is another reason why the cauliflowers should be spaced well apart. Use an organic insecticide recommended by your garden centre or spray with a light solution of soapy water.

Cauliflowers need lots of water but don’t like wet feet. Adjust the watering according to the rainfall or if there is limited rainfall make sure that they never dry out. When they wilt they stop growing.

Fertilise every two weeks either with a side dressing of granular fertiliser or a liquid fertiliser.

Cauliflower is a long crop, taking 16 weeks to harvest. Strong sunlight affects the quality of the curds, changing them from creamy white to light yellow, which is why they should be covered by leaves. Only do this once they are about 10 cm in diameter. Monitor the condition and texture of the head rather than the size to determine when it should be cut. The head should be fully developed and nicely rounded. It should be picked before branching. The curd with a few surrounding leaves should be cut off with a sharp knife and the whole plant pulled out and put on the compost heap, if there is no disease. If the curds are hung upside down in a cool, dark place they will last for about 3-4 weeks. This is an old storage practice that was followed before refrigerators were a household item.

This spicy relish or pickle is a great way to use up extra cauliflower and it is delicious with meat and cheese. This variation is based on British piccalilli, which was first mentioned in 1845. 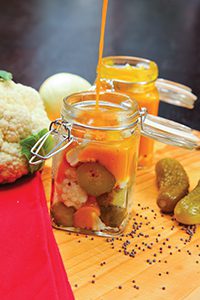 Bring a pot of water to the boil. Add the prepared vegetables and the mustard seeds and cook for 3 minutes. Drain and put the vegetables into sterilised jars. In another saucepan, add the vinegar, all the spices and the sugar, keeping a little vinegar aside to mix with the cornflour. Bring the mixture to the boil and cook for 3 minutes. Add the cornflour/vinegar mixture and cook for another minute, stirring constantly. Pour the liquid mixture over the vegetables in the jars and seal. Allow to mature for 6-8 weeks before enjoying with cold meats and cheese.