How can you protect your seedlings from the destructive chewing habit of cutworms?

After one has planted young seedlings into the garden, it is distressing to come out the next morning to find many of them cut off at ground level. A bit of scratching under the soil surface near the plant will reveal the culprit happily curled up in a horse-shoe shape, sleeping off his feast of the night before: the cutworm. 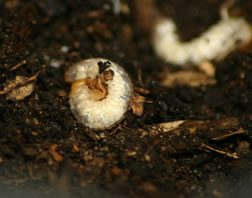 In fact these pests are not really worms but the larvae of the nocturnal owl moth (Agrotis segetum family). The adult moth is nondescript with greyish or brownish forewings that have dark brown markings. An adult female will lay up to 1 500 eggs, either singly or in groups, on the lower part of the plants or on the soil itself. The eggs hatch in 3 to 14 days depending on the species. The larvae’s heads are blackish and the bodies vary in colour from a dirty black to grey and even dull brown. The six larval stages range from 3 to 128 days. The name ‘cutworm’ derives from the larvae’s destructive habit of chewing the soft stems of seedlings.

The larvae of this nocturnal feeder spends its life more or less 2cm below ground. Therefore, it is advisable before planting the seedling, to search with your trowel or a finger the soil of the planting hole for a cutworm.

To further protect your seedling place a collar of paper (for example, a spent toilet roll), or plant in the centre of a plastic cottage cheese container with the bottom cut out. Push the collar about 3cm deep into the ground. While the paper collar will naturally decompose as the seedling grows, the plastic container must be removed carefully by cutting it open, to avoid disturbing the plant’s roots. 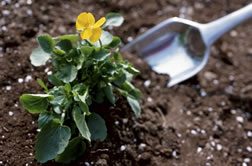 Another method to outwit the cutworm’s appetite is to stick two toothpicks or matchsticks alongside the stem of the seedling, touching the stem. When the cutworm attempts to attack the stem to chew it off, he will encounter the sticks in his attempts to encircle the stem, and the tough wood of the sticks will prevent his attack.

To distract the cutworm’s appetite, prepare a bait of two tablespoons of oats mixed with one teaspoon of sugar and a little water. Place little heaps next to the planted seedlings. At night, check your bait and collect the unwanted guests, which surface at night only.

Your best protection will be provided by natural predators. Birds such as the olive thrush, African hoopoe and hadedah feed by probing the ground for worms and grubs, and bats feed on the night-flying moths whose eggs hatch into cutworm larvae.

After planting seedlings, thoroughly water with wormwood pesticide spray for protection against cutworm.  Wormwood applications also control the bollworm (Heliothis armigera), tomato worm (Spodoptera littoralis) and African army worm (Spodoptera exempta) which are larvae of other night-flying moths. Wormwood (Chrysanthemum vulgare) contains toxic ingredients which are effective against insects in general, as well as rust and mildew. In spring, spray fruit trees with wormwood spray as soon as fruit sets; during summer apply to the soil; in autumn spray the entire plant.

Pour 2 litres of boiling water over 300g of fresh wormwood or 30g of dried wormwood. Allow to steep for 15 minutes and strain. Dilute one part of this mixture with five parts water. Keep out of reach of children.