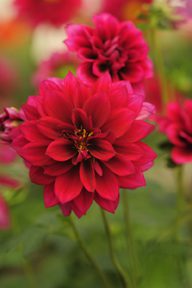 The knowledge that Dahlias are named after a certain Swedish botanist, Dr Dahl, is about as much formal clarity as one gets about this well-known beauty today. The Victorian language of flowers notes that when given as a gift, dahlia flowers represent dignity and elegance which is most likely somehow linked in with them being a symbol of commitment and life-long bonds. Weddings are always dignified and elegant affairs, aren’t they?

Many believe that dahlias are from Holland but truth be told, they are Native to Central America where they were discovered in the 16th century by the Spanish and Holland only received their first box of tubers in 1872. Dahlias have been substantially hybridised over the centuries with an immense variety of both colour and size, but it’s the dahlia variabilis (meaning variable in Latin), our bedding variety, that we’re highlighting today.

Grown from seed, the ready to plant seedlings can be found in Garden Centres during most of the summer months in South Africa. The kaleidoscope of colours at your disposal will quite possibly leave you with a dilemma around choosing what you’re going to buy. Unless true blue is your favourite colour and settling for anything either side of it is not an option, there is almost certainly something to suit everyone.

Dahlias prefer a spot sheltered from the wind with fertile well-draining soil. For optimum results, you should feed them fortnightly, especially during their flowering spells and don’t be shy about deadheading, it actually encourages new blooms to form. They are rather thirsty, so regular watering will be needed, but remember the well-draining soil is essential because their roots are not going to be happy in water logged soil. It’s a bit like enjoying a cold drink on a hot day but you’re left with soggy socks afterwards. 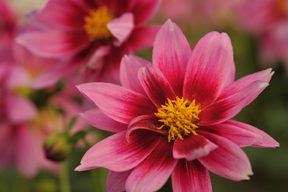 Pick a spot in the garden that gets a minimum of six hours of direct sunlight every day to bring out the best in your dahlias. If you’d like to have sturdy, bushier plants, all you need to do is wait until it has settled in nicely, with a few pairs of leaves on its stem, and then pinch off the last shoot as it’s forming. It will make some side branches resulting in a more solid plant.

We can’t all be perfect and one of the bug bears dahlias have are slugs and snails. Speak to your garden centre about how to limit their snacking tendencies or put down some egg shells or beer traps to spare your new additions being lunch. Planting your seedlings far apart enough to allow a good measure of air movement between them will also send any mildew type diseases packing.

If you’re looking for pot subjects, bed fillers, borders or path liners, the compact bedding dahlias should do the trick, maturing at around 30-40cm and most likely available in your chosen colour scheme too.