Life is a Garden > Months of the Year > December > Marvellous Marigolds

Marvellous because they are the brightest and most cheerful of all the summer annuals. Erect little soldiers guarding your vegetables from ‘nasties’. An enticing nectar source for butterflies. Relentless in their ability to produce flowers throughout their lifespan. A garden is all the richer for these marvellous plants.

In South African garden centres you will more than likely find the two most common Marigolds: Tagetes patula aka French Marigold and Tagetes erecta aka African Marigold which are, despite their common names, native to Mexico and Central America. Both the French and African Marigolds have now been naturalised in other parts of the world. 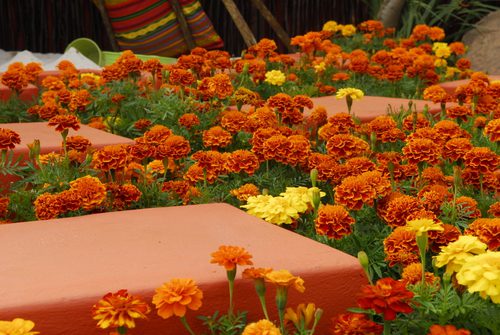 Both of these Marigolds are herbaceous annuals with a dense feathery foliage. Each plant produces many stems which rise above the leaves producing one carnation-like flower per stem.

The French Marigolds can vary greatly in height although in South Africa it is more common to find the dwarf varieties which range from 20 – 30cm. The flowers are either single or double and can get as big as 8cm in diameter. The smaller the flower, the greater the number of flowers per plant. Whilst the predominant colours are orange and yellow there are wonderful variances within these two colours that plant breeders have exploited. Reds and creams have now been added to the palette resulting in some striking combinations and bicolours. 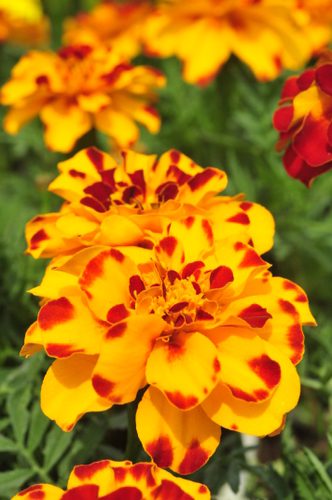 The African Marigold tends to be a more robust looking plant. Due to the large globe type flowers, this plant produces fewer flowers at one any one time than the French type. The height of the African can vary from 25-60cm. The dwarf varieties are more popular. In the case of the African Marigold size definitely does matter. Some varieties produce flowers the size of a tennis ball. Very striking indeed! The colours are somewhat limited ranging from a pale primrose yellow to a deep orange.

Marigold plants are relatively neat and make for excellent borders and edging in the flowerbed. That said however, they work just as well in a container either on their own or mixed with other plants. Marigolds are popularly used in the vegetable patch as they deter nematodes in the soil and flying pests.

When planting Marigolds, it is advisable to pinch back the stems. This will allow for more side branching which in turn will produce a sturdier plant. Marigolds do not require particularly fertile soil and in fact if the soil is too nutritious this will encourage foliage growth to the detriment of the flowers. Plant in full sun and do not over water. It is not necessary to fertilise Marigolds, but it is important to dead head spent flowers.

Apart from being a natural deterrent to garden pests, Marigolds have many medicinal and commercial uses. The colour is extracted from the petals and used as a food and textile dye. The essential oils are used as an antifungal treatment as well as in the perfume industry. The leaves too are edible and can be added to salads

Dried Marigold petals are considered to be the poor man’s saffron?