Rust disease is caused by a fungal parasite that needs living plants to survive. Rust diseases occur most often in mild, moist conditions. Rust is spread by spores that are transferred from infected plants to healthy plants. 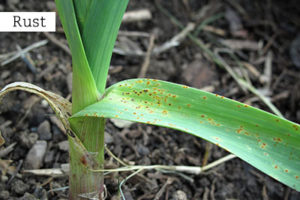 Early on, look for white, slightly raised spots on the undersides of leaves and on the stems. After a short period of time, these spots become covered with reddish-orange spore masses. Later, leaf pustules may turn yellow-green and eventually black.

Growth of plants is stunted. The leaves of plants which have been badly affected will turn yellow and eventually fall off. In very serious cases, plants may die completely.

Remove all affected areas of the plant and dispose of these in the bin. Then treat affected plants with a fungicide. Avoid using an excess of fertilisers which contain nitrogen – they encourage soft, lush growth which rust thrives on. Water in the early morning hours — avoiding overhead sprinklers — to give plants time to dry out during the day.