Life is a Garden > Trade > SOS our trees are under attack

SOS our trees are under attack 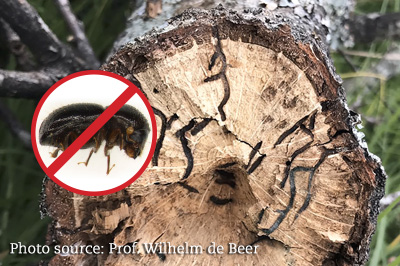 Our trees are in danger and are crying for our help. The Polyphagous Shot Hole Borer(PSHB), an ambrosia beetle, literally has its teeth in our trees and is spreading a fatal fungus called Fusarium euwallaceaewhich is killing them. While only discovered in Pietermaritzburg, Natal in February 2017, the Shot Hole Borer has spread rapidly across the country in a short timeframe to eight of the nine provinces across South Africa. In addition, it is reproducing at a rapid rate which is further contributing to the widespread death of our trees.

What is the Polyphagous Shot Hole Borer

While there is limited knowledge on the beetle at this time, it has been found that the Shot Hole Borer carries the Fusarium fungus at the back of its mouth. As it bores through the trees, the fungus is deposited into the trees. This fungus grows into the sapwood of the tree to serve a dual purpose for the PSHB: to dry out the wood of the tree (which kills the tree) for the larvae and eggs to grow safely in the galleries, and to provide food for the larvae and other adult PSHB living within the tree.

The beetles are able to move from tree to tree flying a distance of approximately 2km at a time. They are Polyphagous which means they are not selective in the trees that they infect and as such, they are likely to infect the nearest tree. However, while the Shot Hole Borer only creates galleries in reproductive host trees such as oak (Quercus), maple (Acer), willow (Salix)and coral trees (Erythrina), avocado (Persea Americana) and castor bean trees (Ricinus communis) amongst others, they create entrance holes that infects both the non-reproductive and reproductive hosts which can lead to branch dieback and kill the infected trees.

While it isn’t confirmed how they came to South Africa, there is speculation that they arrived via wood pallets on ships and spread with human assistance via pallets, firewood, dumped wood and fresh wood chips. As such care needs to be taken in disposing of wood, particularly infested wood and trees to prevent further spread of these beetles.

What should SANA members do?

Fabinet researchers are currently calling on SANA members, Garden centres and nurseries to work with them to try to determine which nursery stock present the greatest risk to attracting the beetle and which are resistant to the beetle. They also aim to determine if the beetles are reproducing in nursery stock within Gauteng and uncover the best chemical treatment for the affected trees. Nurseries, where the beetle has been found in the surrounding areas, are urged to monitor their trees for possible infection and notify Fabinet immediately if they appear to have been infected. 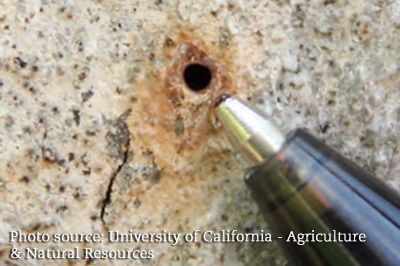 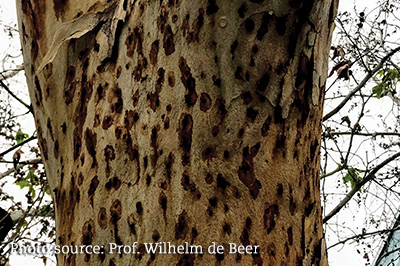 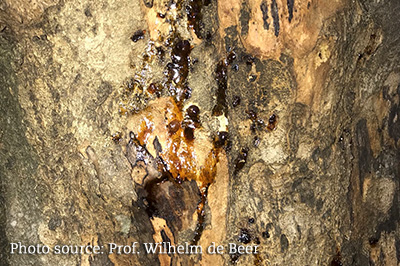 Signs that trees could be infested include:

As containing the spread of the Shot Hole Borer at this time is a key challenge and should be a priority for nursery owners and South Africans, SANA members are called upon to help educate customers on the threat of the Shot Hole Borer, how to recognize it, steps to take should they suspect a possible threat and how to avoid further contamination of trees.

Customers must be urged to buy wood from responsible sources and should they suspect that they have contaminated trees, they must visitwww.fabinet.up.ac.za and follow the steps outlined on the website to confirm whether the tree is infected and which steps to follow if it is contaminated. If it is infected with the PSHB they must take measures to decompose of infected trees responsibly.