Life is a Garden > Months of the Year > May > Vegetable of the Month for May: Lovely Leeks

Vegetable of the Month for May: Lovely Leeks

As well as being essential flavourings for cold season soups and stews, leeks and other alliums like garlic, chives and onions are the kitchen garden’s storm troopers against winter colds and influenza. All members of this genus have a long list of medicinal properties that include antibiotic, anti-inflammatory, analgesic and expectorant actions. 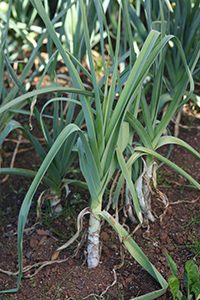 Leeks can be sown any time from January to April, as they are a cool-season crop. They grow easily in most types of soil and need a steady supply of moisture. They are not troubled by pests and diseases. If you forget to sow seeds in time, pop into your local garden centre to buy seedlings, which should be readily available. 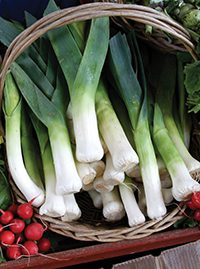 Leeks can be harvested at almost any time if used for flavouring. The green leafy tops are the most delicious part, so don’t discard them. Slice them finely and add them to salads, stir into egg and cheese dishes, or add them at the end of cooking so that you don’t lose their delicate taste.

Growth to maturity, and a more developed white stem, takes about four months. For the best flavour, add leeks at the end of cooking (as with the leaves) and not at the beginning, despite what so many recipes recommend. They have a distinct onion flavour that is much milder than onions.

The classic combination of leek and potato works well in this dish, and we added some other tasty goodies for extra flavour. 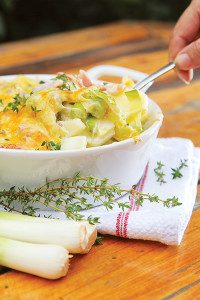 6 leeks (with the roots and top leaves removed), sliced

Note: The bacon can be left out for a delicious vegetarian potato bake