Life is a Garden > Months of the Year > December > Bountiful Begonias

Hailing from around the globe, including several indigenous varieties, Begonias come from a massive genus consisting of more than a thousand species. With over ten thousand documented hybrids there is an almost confusing array to choose from. 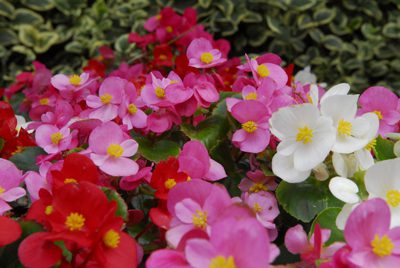 When it comes to long lasting, outdoor colour however, there is little to be confused about. Begonia semperflorens or bedding Begonias and its numerous cultivars, are just the thing to brighten up those dull areas in the garden.

Renowned for their easy-growing and free-flowering habits, bedding Begonias are available in red, pink, white and cream, set off against bright green or deep bronze foliage. Begonias are an excellent alternative to Impatiens to provide masses of summer colour. They thrive in both sun and shade. These obliging plants are also tolerant of both acid and alkaline soils. The white and light pink varieties are particularly well suited for the shade because the lighter colours show up well, while if the reds are planted in sun their colours are a shade or two deeper. One of the misconceptions about bronze leaf varieties is that they are more sun tolerant. In fact they require the same amount as the other varieties.

Begonias don’t appreciate warm soil while they are getting themselves established. When planting in sunny position the seedlings need to be placed closer together (10cm apart) as the plants won’t spread as much. If it is very hot, it is a good idea to mulch between the plants to keep the soil cool, although as the plants grow they will soon shade their roots. Many gardeners are under the misapprehension that either the green or bronze variety performs well in the sun. This is just a myth as both green and bronze varieties perform well in both sun and shade. Remember to water plants in the sun more often, although their waxy leaves means they are efficient users of water, for example, they are more water wise than impatiens. In shade, Begonias grow a bit taller and spread further so space them 15cm apart when planting. 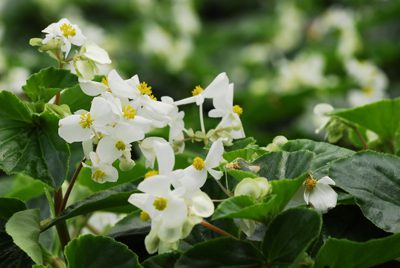 One of the many advantages bedding Begonias have is that they are relatively maintenance free. They don’t need deadheading and will provide colour from early spring right through to the end of May, especially if given a regular helping of seedling food.

If you live in an area with mild winters, the plants will survive the cold months although they may look very scrappy through July and August.

In early spring, feed them, cut them back and they will give another good show. They won’t survive a heavy or black frost. Seedling trays are available at nurseries in late spring and through the summer.