With the holidays around the corner it’s about to become a festival of green and red on every corner and while South Africans are not quite as competitive as the English or Americans, we do like to create memorable occasions. In fact, since we’re not such sticklers for re-enacting exact traditions we’re probably more inclined to try something different to make those memories a little more our own.

Whether it’s your turn to host festivities this year or not, why not plant up a couple of trays of the dwarf varieties of Salvia splendens, also known as Red or Scarlet Salvias into some small table sized pots which can be used for table decorations or given as little gifts with some tinsel sprinkled over them? They’re not only the right shape for a festive tree but they’re even red and green! Planting the regular sized Salvia into beds and then cutting them for vases would also work beautifully.

It would be best to purchase seedlings for this exercise rather than try growing them from seed, unless you’ve already started! The seedlings in the garden centres generally have a few flowers on the plants so as soon as they are planted you have instant colour. As they grow and fill out, more and more blooms are produced, ensuring that your colour spectacle just gets better. With a bit of care, most bedding plants will give you a minimum of six months’ worth of flowers, with many that keep on producing for a whole year.

Successful pot displays, no matter how small, always require that the soil is prepared well and good drainage is a prerequisite. Add a good general-purpose fertiliser into the soil before planting and do not pull the seedlings out of the tray by their stem or leaves, as this will damage them.  Rather push them out from below. Don’t bury the stems of the seedlings when planting, rather plant them to the depth that they are in the seedling tray. After planting, water regularly until they are established and even though salvias are not thirsty plants, if you potted them up with one seedling per pot into small pots for gifts, they could dry out very quickly and may need to be monitored more regularly.

The watering requirement for the smaller pots is especially true in light of the fact that salvia prefer direct sunlight which brings out their rich red colour even more. They do perform well in dappled shade too though, so if you’re not able to monitor the watering of the smaller pots as frequently as would be necessary in direct sun, then rather play it safe under some cover.

If you’re the relative who often surprises with something different on special occasions, this is the one for you. A word of caution though, when shopping for your seedlings, be sure to make certain of the colour because even though Salvia splendens is most commonly referred to as Red Salvias, it is actually available in a whole range of colours! 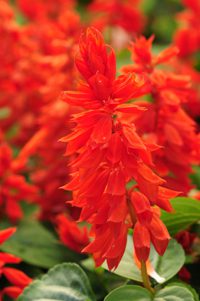 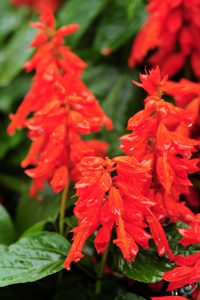