When one hears the word “Marigold” it’s virtually impossible not to think of the gorgeous golden colour that many marigolds offer us. Offering their warm sunny colours for most of the year, outlasting many other annuals, it’s a little difficult to imagine that they are actually associated with grief, jealousy and cruelty in their native land, Mexico. Still used today in a Day of the Dead ceremonies, it is the Virgin Mary that inspired the name, meaning Mary’s Gold. 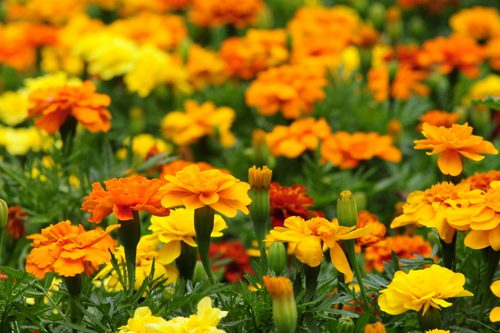 It’s not all doom and gloom though, luckily this gorgeous bloom has been adopted around the world and many other symbolisms have been bestowed on them. The ancient Welsh used them to predict weather, knowing that open marigolds would bring good weather. It was also believed that keeping a pot of marigolds in a household with a tempestuous relationship would create a peaceful environment. Marigolds were even worn by witches to stop people gossiping about them or negativity coming their way.

There is a legend that Mother Mary used marigolds as money and so the early Christians put marigold blooms at her feet instead of coins as an offering. In India, they too offer marigolds to the Gods to appease them.

With so much meaning and symbolism behind them, marigold don’t disappoint on the usefulness scale either. They naturally deter pests so planting them in your veggie patch is a must, the colour from their petals is used as food and textile dye, their essential oils are used as an antifungal treatment!

Deciding whether you’re after a tall plant with fewer but larger globe flowers or a dwarf plant with more but smaller flowers will be your first task. The African Marigold is the bigger plant with some varieties reaching up to 60cm tall and flowers the size of tennis balls while the French Marigold we get in South Africa is commonly the dwarf variety reaching about 30cm in height with flowers about 8cm in diameter.

The colours available are solid yellow and orange or as bicolour too and some breeders have even added red and cream to the bicolour pool, so look out for those stunning combo’s. With all this warmth in colour, remember that they also love to be planted in full sun and this hardy little annual is a favourite for many reasons but being water wise is at the top of that list so don’t over water them. They also don’t like very nutritious soil (bonus!) so don’t over fertilise or you’ll end up with loads of foliage and not many flowers.

Whether you have a border or edging that needs creating, a container that needs filling, a vegetable patch that needs a natural pesticide or just a dry sunny flowerbed begging for some company, pop into your garden centre today and pick out some sunny marigolds to fill that gap. 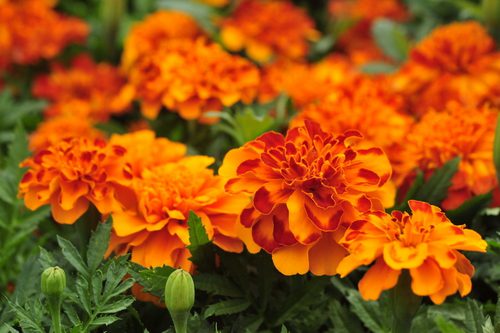