Life is a Garden > Months of the Year > August > Rosemary Delight! 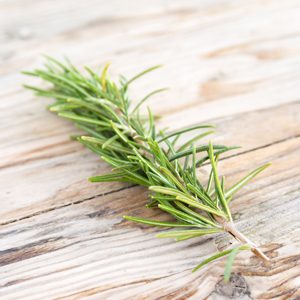 Rosemary – protective and satisfying on all fronts

Rosemary is a Mediterranean herb that has been used since ancient times as a plague and pest repellent, an odorant and for medicinal uses because of its strong aroma and antiseptic qualities.

Modern day gardeners’ treasure rosemary (Rosmarinus officinalis), as it is one of the handiest garden plants around, most welcome in both the ornamental and vegetable garden, and even as a hassle-free container plant. It is easy to grow in well-drained, composted soil, loves sun and heat, is very water wise and even fairly frost resistant. The plants are evergreen, thus allowing you access to the aromatic foliage all year long to use in cooking, cosmetic products and medicines. They start flowering in early summer and keep this up until late autumn. We also have access to different varieties, from upright to trailing, and if you are not partial to blue flowers you can go for pink with Rosmarinus ‘Major Pink’ or white, with Rosmarinus ‘Miss Jessop’s Upright’.

You can plant rosemary close to beans, carrots and cabbages, as it protects them from many traditional pests. Snails and slugs are also not happy with its presence. 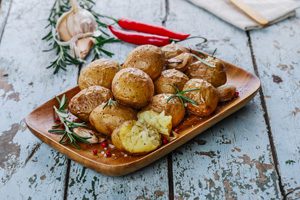 Tip: Roast the potatoes for quite a while before turning them, or they will break up and stick to the roasting dish. Be patient – the whole process takes close to an hour!